Patriarchy is a male-dominated social structure that leads to the oppression of women.1  As a microcosm of larger society, the Nonhuman Animal rights movement demonstrates many forms of sexism that are designed to protect male power and entrench female powerlessness. Because it is a movement concerned with ending the oppression of other animals, Vegan Feminist Network argues that an intersectional approach is essential to acknowledge how various manifestations of oppression overlap and support one another. Many ecofeminists have also argued that the oppression of other animals is a direct result of patriarchy. This is because patriarchy is a structure that prioritizes male dominance, pleasure, and privilege at the expense of others.

1.  Women make up over half of the world’s population, but women hold only 18% of legislative seats worldwide.

Why vegans should care:  We see this leadership distortion in the Nonhuman Animal rights movement as well.  While women make up over half of our population and 80% of our movement, they represent much fewer positions of leadership.  When positions of power and decision-making are granted to men, expect that men will inevitably (intentionally or not) privilege their own interests.  Women need equal participation in this process to make sure their needs are being met and that women’s interests are being represented appropriately.

Why vegans should care:  While this statistic is clearly skewed by incorporating developing nations, in richer countries like the United States, women are still much more likely to be living in poverty or extreme poverty (often as a result of divorce and/or single parenthood).  What this means for us is that women have substantially fewer resources, and this limited capital (economic capital, but also social and political capital) translates to women’s limited ability to participate in social movement activity, which is often costly in terms of money, time, inconvenience, legal risks, etc.  In a movement that is mostly female, this is a substantial impairment.

Why vegans should care:  Again, the absence of women in powerful positions is reflected in the Nonhuman Animal rights movement.  This reflects a general devaluation of women’s ability and input.  In advocacy efforts, women are far more likely to make up the “rank and file,” working hard behind the scenes to accomplish the necessary, but largely uncelebrated, mundane tasks.  Men write the theory, lead the protests, and lecture on podcasts, while women “make the coffee” so to speak.  This is a terrible squandering of a powerful demographic.  We’re leaving untapped the creativity and capabilities of thousands of women.

4. 1 in 3 women will be raped, beaten, coerced into sex, or otherwise abused at least once in her lifetime.  This number is much higher for college students and would be higher still if women A) recognized their rape or assault as such (they are socialized otherwise) and B) felt safe reporting it.  As many as 71% of women have experienced physical and/or sexual violence by a partner.

Why vegans should care:  Violence against women exists in the Nonhuman Animal rights movement just as it does in the  larger public.  Interviewing female activists in Women and the Animal Rights Movement, Emily Gaarder found that sexual harassment against female activists was relatively common.  In my own activist career, I have documented several instances which I have discussed in my article with The Examiner and also The Academic Abolitionist Vegan.

Furthermore, as I will elaborate in my next point, many Nonhuman Animal rights campaigns use women’s bodies as sites of sexualized violence.  The examples are countless, but some primary participants in this trend include:

Violence against women–a lived reality for millions–is made sexy in campaign after campaign after campaign.  Women’s bodies are being used as bait, inviting predation.  Their bodies are used in ways that obscures their personhood; they become consumable resources.  When women are treated as “meat,” that means they aren’t persons.  Like Nonhuman Animals, women’s worth never extends beyond her value as an object to be consumed pleasurably.  The violence that they suffer doesn’t matter.  In fact, it’s often made invisible.

5.  We live in a rape culture–where rape and violence against women is trivialized, normalized, and even condoned.

Why vegans should care:  The Nonhuman Animal rights movement is telling women they have two options:  a) Do the drudgery behind the scenes or b) Get naked “for the cause.”

The Nonhuman Animal rights movement has sexualized female activism.  The sexual objectification of women is directly responsible for women’s low self-esteem, low self-efficacy, self-objectification, and eating disorders.  It is also directly related to prevailing misogyny and violence against women.  Is this something a peace movement really wants to be responsible for?  When LUSH hosts a street demo featuring a woman being tortured by a man for 10 hours–while she wears nothing but a nude bodysuit–and their spokesperson says, in so many words, this is intended to teach women (who purchase tested cosmetics) a lesson–this is rape culture. 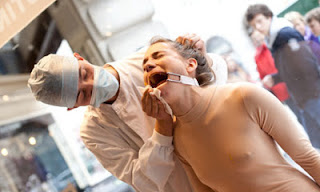 In another example of trivialized (and sexualized) violence against women, LUSH has female employees dressed as foxes pose coquettishly as a man threatens them with a butcher knife.  Incidentally, about 1500 women are killed by domestic violence in the United States each year.

6. Men own over 90% of the media, and sexualizing women is profitable.

Ninety-six percent of sexually objectified bodies in media and advertising are female.  Pornography rakes in at least 97 billion dollars each year.

Why vegans should care:  The Nonhuman Animal rights movement is intentionally exploiting sexism for “the cause” and for fundraising.  Women’s bodies are being used as living billboards.

Carol Adams has even argued that the entire “rights” language of Nonhuman Animal advocacy fetishizes masculinity in equating humanity with the special ability to engage rational thought.2 If masculinity and rationality are used to define humanity, a dichotomy is created that can otherize femininity, emotionality, and animality.  The “animal rights” project is a masculine endeavor intended to protect patriarchy and subdue women.  Without recognizing how Nonhuman Animals and women are exploited in similar ways and without recognizing the pivotal role of patriarchy in maintaining oppression, the movement only spins its wheels.

[ . . . ] how does the privilege granted to those who are dominant influence our actions, our methods, and our campaigns? I discuss this in my article in John Sanbonmatsu’s anthology (Critical Theory and Animal Liberation): male militaristic language; we have to “rally” around leaders (some of whom have a history of sexual harassment), the methodologies of confrontation, claims that we are at war, that say we must, must, must, watch gory videos (“the animals experience this, the least we can do is watch this”). Who says?

In an interview with ARZone in 2010, I said, “if the animal rights movement was stripped of its male rights language, its mainly male leaders, and the sexist approach of some of the promotional material, what would we have? We would have to acknowledge that it is largely a movement of women who care about animals. Being a part of a movement that is overwhelmingly female identified is often not seen as positive. So I have always felt that the animal rights movement compensates for its basic female identification by lifting up “fathers” (Singer, Regan, Francione, etc.), by situating these fathers to debate each other, and by making sure that most of the spokespeople are men. When you add PETA and other sexist ads, you find a movement that is trying to talk to men about some of the objects in their lives.” (Journal for Critical Animal Studies, 2013, 11.1, pp. 129-130)

Can it be any clearer?  We live in a patriarchy, and women are suffering dearly.  The attack on women is so persistent, so violent, and so thorough that all women are in some way victimized and many women suffer emotionally and/or physically.  Many women lose their lives as a result.  Women are reminded at every opportunity that we are lesser. Patriarchy insists that we matter less and that our interests are secondary and unimportant.

Patriarchy creates a toxic environment for women. It is designed to benefit men at the expense of women. A social movement that retains this inequality is fundamentally ill-equipped to fight oppression. Furthermore, a social movement that is 80% women and protecting patriarchy is really shooting itself in the foot.

We should be critical of male hegemony that insists that feminism is unnecessary, that patriarchy is over, and that women need to sit down and shut up.  We need to acknowledge that women are disadvantaged.  If we truly care about social justice, we should look around to our sisters and give them a leg up and let them SPEAK and let them LEAD.  I’m not appealing to authority, I’m appealing to the reality of womanhood. Women are pushed down. We are held under, we are ignored, we are ridiculed, we are silenced, we are taken advantage of, we are raped, and we are oppressed.  If veganism is really about extending justice to all, then vegans need to take heed and take responsibility.

1.  The term “woman” in this article is meant to include girls and self-identified transwomen.
2. While I agree that rights terminology is patriarchal, can maintain hierarchies of worth, and can create a competitive atmosphere of conflicting interests, I do not take the position that we should abandon a goal to extend rights to Nonhuman Animals.