PETA and their celebrity spokesperson Pamela Anderson made headlines this week by traveling to Pheonix to promote Sheriff Joe Arpaio. For those that don’t know, “Sheriff Joe” has been widely criticized for racial profiling of Latinos, racist discrimination against inmates, abuse of power, illegal arrests and deplorable conditions in jail, including numerous wrongful deaths under his watch.  This criticism has come from traditional human rights organizations like Amnesty International and ACLU, along with the New York Times (who called him “America’s Worst Sheriff“) and the U.S. Department of Justice who sued him for “intentionally and systematically discriminating against Latinos.”

So why exactly did Pamela and PETA decide to showcase “Sheriff Joe?” Because he serves vegetarian food to the inmates at Maricopa County Jail. 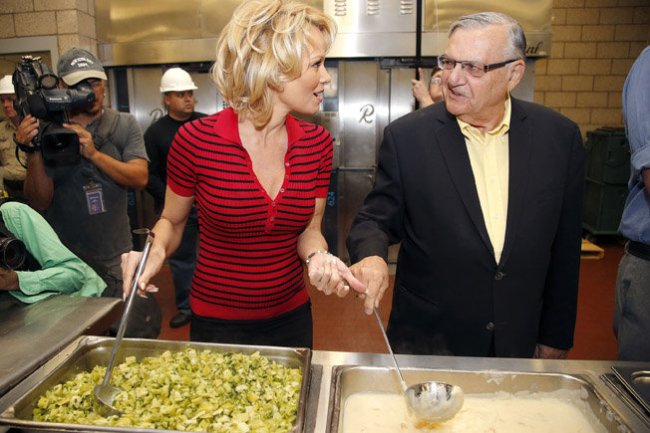 PETA is trying to spin it as a way to protect animals and promote health, but it’s clear Arpaio’s decision to serve vegetarian food is because it’s cheaper. In attempt to save money, “Sheriff Joe” has moved toward only serving two meals a day,charging inmates for their own meals, serving green bologna and has cut out salt, sugar and condiments from meals.

Examples of Arpaio’s abusive treatment of inmates are too extensive to list here (including “Tent City” in 135 degree heat, use of chain-gangs, and many others). While Arpaio’s specific form of racist abuse makes PETA and Anderson’s gesture of support particularly egregious, support for any jail or prison is problematic for an organization promoting veganism from an animal rights perspective.

Veganism rooted in a desire to liberate all animals from captivity and exploitation is inconsistent with supporting prisons. Prisons encage and exploit human animals.

This is particularly true in the context of the prison-industrial complex. Inmates (human animals) are held in captivity and forced to work against their will, while others profit from this captivity and forced labor. Arpaio’s use of chain-gangs is an excellent example of this. Inmates are forced to work in order to get out of lockdown. They do not get paid, providing free labor to the County. If another species were exploited for the financial benefit of humans, animal rights organizations would actively oppose it (as they should). It would be easy to imagine PETA criticizing animal “chain-gangs” given their opposition to animal-based industries and their position on chaining dogs.

A likely response will be that the people in prisons did something to be there, unlike animals on farms or at zoos. As part of the press release, Pamela Anderson said “I believe people can be rehabilitated from the inside out. Jails are full of people wanting to change, to make amends, to learn healthier habits and understand compassion and empathy.”

But there are two things to consider about this:

First, PETA and Pamela went to a jail, not a prison. There’s a difference. The majority of people in jail are pre-trial, meaning they have not been convicted and are presumed innocent in our society. Those in jail are people awaiting trial who could not afford to post bail. So overwhelmingly, the people in Maricopa Jail and county jails like it are poor and working-class people who have not been convicted of any crime. The small percentage who are in jail after a conviction have been convicted of misdemeanors – lesser crimes including traffic violations, vandalism, minor drug possession, etc.

Second, incarceration doesn’t rehabilitate. The disconnect in the analysis of some animal rights activists is striking when comparing anti-social behavior among humans and non-human animals.  One example is Tilikum, the Orca held at SeaWorld who has killed three different trainers. The animal rights perspective has been to look at the trauma Tilikum suffered by being captured and held in captivity. No animal rights organization or activist would claim that the appropriate response is to continue to hold him in captivity in order to “rehabilitate” him.

Similarly, animal activists embrace a thoughtful, nuanced and empathetic approach toward problematic behavior in dogs. (Something I’m familiar with from fostering and adopting rescued dogs). In addressing dog behavior, animal advocates encourage looking to the socialization, history and experiences of each individual animal: What in their background causes them to behave (or misbehave) in a particular way and how can you deal with the underlying cause? No dog trainer would suggest that locking a dog in a cage for years would be an effective way to get a dog to end their bad behavior. (Note that PETA takes a strong position against using dog crates) Yet PETA and other animal welfare organizations perpetuate the myth that caging humans leads to “rehabilitation.”

Embracing a radical social analysis means challenging and critiquing all societal assumption. And supporting liberation of all living things means freeing all humans from the cages of prisons.

This essay was originally published by NoCages.org on April 14, 2015.